Video Memories from the Past 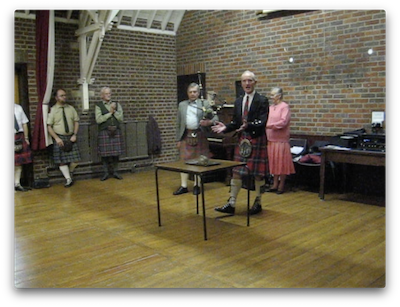 Stephen Webb has produced three videos from his archives for us to enjoy.

The first is from 2006 and is the Auld Lang Syne at the end of the Halloween Dance on 31st October 2006.   Stephen has panned round the circle so get to see everyone who was there.  It lasts for less than a minute and can be viewed here.

The second is Addressing the Haggis at the Burns Night dance on 22nd January 2008 with Alastair Cuthbertson supported by George Bateson on pipes and Ros Crawford carrying the haggis.  The video can be viewed here.

The third is of Ian Galbraith reciting The Lum Hat Wantin’ The Croon at Swathmore Nursing Home in Gerrards Cross as part of a dance demonstration afternoon on 19 June 2010.  This video can be viewed here (note the video starts sideways but quickly moves upright).

This website uses cookies to improve your experience while you navigate through the website. Out of these cookies, the cookies that are categorized as necessary are stored on your browser as they are essential for the working of basic functionalities of the website. We also use third-party cookies that help us analyze and understand how you use this website. These cookies will be stored in your browser only with your consent. You also have the option to opt-out of these cookies. But opting out of some of these cookies may have an effect on your browsing experience.
Necessary Always Enabled
Necessary cookies are absolutely essential for the website to function properly. This category only includes cookies that ensures basic functionalities and security features of the website. These cookies do not store any personal information.
Non-necessary
Any cookies that may not be particularly necessary for the website to function and is used specifically to collect user personal data via analytics, ads, other embedded contents are termed as non-necessary cookies. It is mandatory to procure user consent prior to running these cookies on your website.
SAVE & ACCEPT